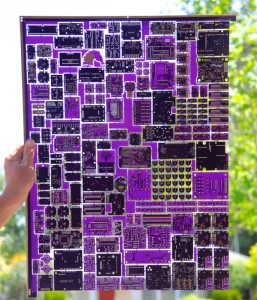 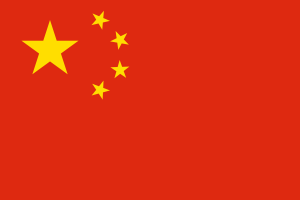 I am doing an interesting test.  Tonight I fabbed out 3 1″x1″ designs to OSH-Park and ITEAD Studio simultaneously.  So far, I have only used OSH-Park, but I heard good things about ITEAD Studio – and for reasons I hope to talk about later – they make different colored PCBs an option ( OSH-Park is Purple only ).  For this new design I am wanting red PCBs for the final proto’s – so I’m giving ITEAD Studio a try.

Flow Comparison:  I definitely prefer OSH-Park, with OSH-Park, you upload a single ZIP file of Gerbers and Excellon files and they render all the layers on the website for review before you purchase.  For ITEAD Studio you pay 1st ( Paypal ) and then after you pay, you upload your ZIP ( I used the exact same ZIP ) and they tell you if they accepted it or not.  Not exactly a warm and fuzzy feeling – but this is a test after all.

First thoughts. OSH-Park I get the boards for basically $2 each.  With ITEAD Studio I get the boards for about $2 each, I just get a lot more ( 30 total vs 9 total ).  ITEAD pricing is definitely better for larger size boards.  I tend to do a lot of 1″x1″ or smaller designs – where OSH-Park rules.

02.20.2015 Update : OSH-Park PCBs arrived in their friendly purple envelope today. Just about 2weeks from design upload to arriving in my mailbox. My ITEAD Studio upload are still “PCBs are in producing using this Gerber file”. Hoping this wasn’t a waste of money. Will wait a couple more weeks and then assemble the purple boards if the red ones don’t show up.

Ran across a great interview of James Neal ( Laen ) – founder of OSH-Park. Worth a read! He uses two Fabs, one in Chicago, one in Texas. I uploaded a picture of an OSH-Park panel. You can tell how Laen really maximizes panel area with his gerber fitting algorithm to squeeze as many designs as possible into a single panel. Everybody else panelizes with simple rectangular dimensions with a lot more FR4 waste.

02.27.2015 Update : Just received eMail from ITEAD that my boards have shipped. Received DHL Tracking Number. 20 days from upload to shipment. 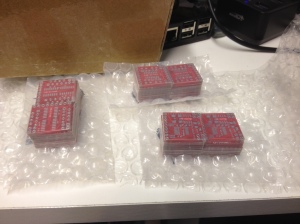 ITEAD scores plusses for shipping as they left China on Friday morning and arrived on my doorstep Monday morning, not bad for $25 via DHL.  I ordered 10 pcs of Max 5x5cm for a design 23x23mm and received 16 pcs total for $15 ( red was +$5 extra over green ). The groups of 16 were shrink wrapped tight together.  The OSH-Park PCBs float around loose in a larger mailer – so this is definitely less susceptible to shipping damage.

OSH-Park scores plusses for an ENIG (gold) finish versus ITEAD’s HASL (solder) finish. ITEAD offers ENIG, but for an extra $20.

With the exception of silkscreen – PCB quality appears to be great for both.  The OSH-Park boards I have to dike off and file down the snap bridges – which is fine for a couple of PCBs, would get old for doing a dozen.  Silkscreen on the ITEAD boards looks terrible. I think they use an inkjet printer instead of stencils. Very blocky. They also stamp a fab ID number on the backside of each board. I didn’t care for that.  See above picture of side by side of the two identical boards. That “298-217789” – I didn’t put that there – ITEAD did. Makes me wonder if OSH-Park doesn’t use machine vision for PCB sorting prior to shipping.

I just noticed that somebody else did an OSH-Park to ITEAD comparison.  They have much more detailed data – See this blog site .

In conclusion – OSH-Park I prefer for very small prototype boards with fast turn around. ITEAD I would chose for larger boards especially if I wanted any kind of quantity. Too bad about the silkscreen however. 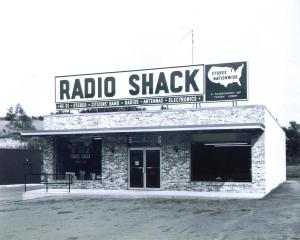 Radio Shack filed for Bankruptcy and is about to close for good. Yesterday at work standing around in my group of Electrical Engineers I felt the need to say something. “You know, if it wasn’t for Radio Shack – I wouldn’t be here today”, “Yeah me too”.  We weren’t having a group cry or anything – but we did realize that many of us shared the same experience ( sometimes decades apart ) that started us as little kid electronic hobbyists on to paths to becoming Electrical Engineers. I knew at age 10 that I wanted to be an Electrical Engineer. This kept me motivated and on track for the next ten years to get my BSEE.

A store at a mall that offered electronics where you could build things.  The 100-in-1 kit got me started. For $30 you got a wooden box with a piece of cardboard with components attached to springs and wires to attach them. This wasn’t building pretend space ships with plastic LEGOs – this was so much more. This was making the future. I built sirens, and amplifiers and even a radio transmitter. This thing was a gateway drug to Electrical Engineering. 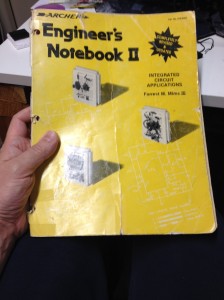 After building all 100 projects for the 100th time ( thats 10,000 afternoons of pre-internet, pre-cable TV childhood boredom resolved ) I escaped the confines of the wonderful wooden box and discovered the $2 “Engineer’s Notebook” from Forrest M. Mims III. This 128 page recycled paper marvel was the Rosetta Stone of what all those mysterious transistors and ICs inside broken electronics did. 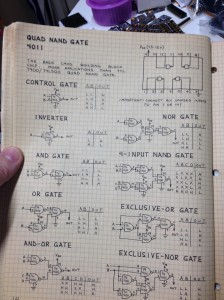 10 years before opening a text book in college on CMOS – I discovered the 4011 CMOS NAND gate. From it and a 9V battery ( from my Radio Shack Battery Club Card ) – I could build other gates.  The best thing about the “Engineers Notebook” was that every IC and resistor and capacitor in it could be purchased from my local RadioShack mall store.

Now I just buy everything from Digikey – as they have exactly what I want in every package size imaginable.  RadioShack had like 30 different resistors, Digikey has 500,000. When you are getting started in electronics – which is better? 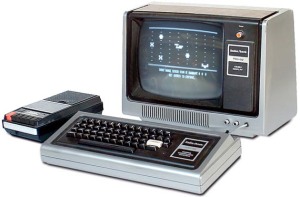 In 1977 RadioShack came out with a personal computer the TRS-80 Model-I. I think I had one by age 9 or 10 right around 1980.  Yes it was crap, but at $499 versus $2K for an Apple-II – it was incredibly affordable back then.  The thing about the TRS-80 and the Apple-II was that they are both computers – one was accessible, the other not.  Before the TRS-80, the most advanced piece of electronics in our house was a calculator that did multiplication and division. I was soon teaching myself BASIC and wiring up my 7400 series TTL IC’s to the magical 40 pin expansion connector that brought the raw 2 MHz Z80 8bit bus right out to my breadboard.  I was writing software at age 10 that flashed LEDs and made sounds from an otherwise completely silent computer. A computer in my home. My own Computer!  Awe – the 1970s and early 80s. Wonderful time for technology.  Jump forward to 1988, thanks to my “Trash 80” experience – I breezed through my freshman Fortran programming class at the University of Washington that many of my fellow EE classmates barely survived.

Thank you Radio Shack for sending me on this wonderful path to becoming an Electrical Engineer.  RIP