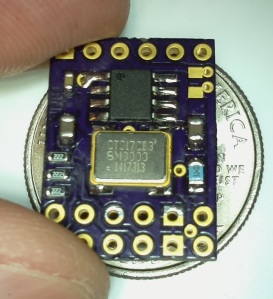 Assembled my 1st Arduino Pro Mini clone for my Nano Bus. It is an Atmel ATMEGA328 AVR 8bit CPU with Arduino Bootloader, a 8 MHz XO, 3.3V LDO, Red LED, 1×6 FTDI Connector and a 2×6 Nano Bus connector on a 0.6″ x 0.8″ 2-layer PCB. Functionally equivalent to the SparkFun   Arduino Pro Mini  – in my opinion the best $10 you can spend for a micro controller. My spin is that it is much smaller and plugs directly into my Nano Xilinx FPGA boards. The Nano bus has both SPI and I2C pins of AVR for interfacing with my FPGA designs. I used my Linux workstation and the Atmel AVRISP mkII ISP programmer to load the Arduino Bootloader. Now that the Arduino bootloader is in flash I can use the Windows Arduino app to load sketches via a standard FTDI cable. Works great. My total cost is about $8 per assembly – no great savings over Sparkfun – but in a form factor I prefer.