2016.10.24 : Black Mesa Labs has an ongoing mission to develop easy to use and fully capable open-source hardware and software tools that make engineering electronics easier. One such tool is this new low cost open-source logic analyzer called SUMP2 for people who otherwise work in the blind without an oscilloscope or logic analyzer on their bench top.  BML’s 1st incarnation called SUMP1-RLE in 2014 was a 16bit FPGA based logic analyzer that performed real-time hardware compression and decompression. The decompressed data was streamed out over USB using the open SUMP protocol ( hence the name ), allowing it to be used with the excellent Java software from the original 2007 sump.org project. The SUMP1-RLE project was later enhanced from just 16 triggerable events to also include 2 DWORDs of “data” ( additional 64bits of non-triggering non-compressed signals ) and advanced triggering options. Including the data DWORDs made SUMP1 a useful tool for complex FPGA development debugging of internal FPGA event nodes and data paths. These new features required new custom software, written by BML in .NET for Windows. The software was functional, but graphically slow and was mostly used for trigger setup and then exporting captured data as VCD files into GTKwave for viewing. SUMP1 also did not scale in width, depth or time, it was fixed at 16 events, 2 DWORDs and a 2^20 timestamp ( 1 Million Samples ) both in hardware and software. In 2016 BML decided to do a complete start-over on the SUMP RLE concept and developed SUMP2-RLE ( or just SUMP2 for short ). New Hardware, New Software. More features, better scaling – introducing SUMP2:

The sump2.v verilog file is designed to work inside any FPGA or ASIC containing block RAM and scales in complexity from 1-4 bytes of events ( 8-32 triggerable and RLE compressible signals ) and 0-16 DWORDs of up to 512 non-compressed data bits. Depth and width of RAM scales on instantiation to best fit a wide range of FPGA technology. The full featured SUMP2 configuration is designed to be used on internal nodes within very large $100 – $1000 FPGAs. In this configuration for analyzing internal FPGA nodes it is very similar to proprietary FPGA vendor solutions such as Xilinx ChipScope and Altera SignalTap. SUMP2 has the advantage of being fully open and also offers RLE compression that can offer 10x – 1000x the time storage of similar FPGA logic analyzers not aided by hardware compression. Duty cycle hardware applications such a pulse-echo radar can readily achieve 5,000x compression using the new RLE engine with 2^32 timestamps. The scalability of SUMP2 also permits it to work in ultra low cost ( sub $5 ) FPGAs such as the Lattice iCE family. The Lattice iCEstick eval board at only $22 with included FTDI USB interface and PROM programming provides for a perfect SUMP2 platform for electronic debugging of Arduino and Raspberry Pi like projects involving 3V serial ports and GPIO. Communication between hardware and software over USB is all done using the Mesa Bus Protocol , an open serial protocol for transferring 32bit PCI reads and writes over UART, SPI and SERDES serial links between computers and FPGAs.

To fit within the iCE40HX1K FPGA, sump2.v verilog RTL design is instantiated for 16 input events, no DWORDs and 1k depth of RLE capture RAM sampling at 96 MHz. The graphical backend software is sump2.py, a PyGame application used for arming the hardware and dumping and displaying the capture for analysis. Compared to the SUMP1 .NET app, the PyGame SUMP2 version is very fast. Although sump2.py supports exporting and importing VCD files, it is entirely not necessary to use a standalone VCD viewer such as GTKwave or Modelsim.

A simple example of a Unit Under Test.  Below pictured is a 10 MHz ( 100ns period ) oscillator driving a 74ACT161 4bit counter with a 74HC08 AND gate on the d(2) and d(3) upper bits of the counter. A push button switch to ground with a 10K pullup resets the counter. 8 nodes of interest are connected via Dupont ribbon cable to the iCEstick PMOD header.

The initial full capture of the reset button being released. The capture represents 4168 samples at 96 MHz using only 1K of RAM by utilizing RLE compression. RAM is hard partitioned 50/50 pre and post trigger.

SUMP2 has the ability of masking input events prior to arming which allows for greater RLE time compression. By double-clicking and “Hiding” the clk_10m signal prior to a new acquisition, the highly active clock signal is masked. This next capture without the 10 MHz clock is twice the length, or 83uS.  Also notice the very short reset switch bounce captured. Masking the LSB counter bits would further increase total capture time.

Mouse scroll wheel can be used for zooming in and out in time, allowing for rapid detailed analysis and cursor measurements. 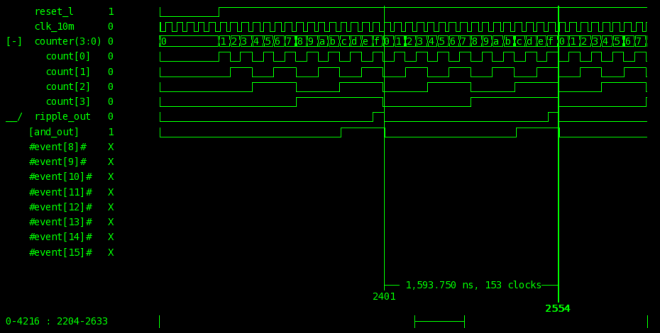 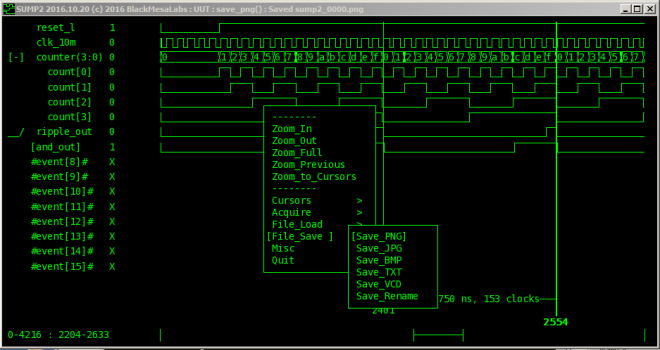 The left side popup allows for selecting a signal and then assigning it as a rising or falling edge trigger.

Steps for building your own open-source SUMP2 Logic Analyzer for the Lattice iCEstick.

and this free stuff from Black Mesa Labs:

And finally, a bunch of text file documentation from Black Mesa Labs:

Please enjoy SUMP2, a 96 MSPS 16bit 3V logic analyzer for only $22. Follow BML on Twitter for updates on SUMP2 and other open-source software and hardware projects from Black Mesa Labs.

Nice article ( in Russian ) and SUMP2